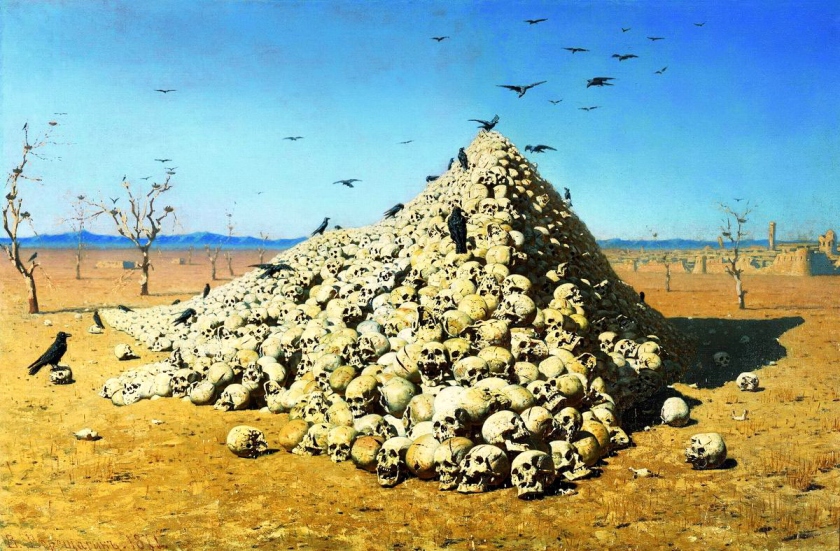 In the course of his life Vereshchagin made trips in Russia, Central Asia, China, India, Middle East, Japan. He thoroughly portrayed different ethnicities, their everyday life, traditions, costumes and gathered vast ethnographic collection. His memoir is an interesting source of information about people that he met.

Vereshchagin visited the most remote corners of the world, in India, together with his wife he was the first European man to attend a religious ceremony in one of mountain monastery.

Although Vereshchagin loved to paint peaceful life, his works that demonstrated war brough him fame (see up The Apotheosis of War). As he considered that in order to be able to portray military scenes truthfully, he volunteered and personally participated in many battles. He took part in Russian-Turkish war and Central Asian campaign. In 1904, he went to Japan, a country that he dreamed for years. On his way to battle fields of Russian-Japanease wars he died when flagship blasted on a mine.

Vereshchagin established himself as independent painter, he never joined any society of fellowship. Russian authorities criticised him for lack of patriotism and too realistic military scenes. But military men respected him, General Mikhail Skobelev gave him his personal blazon. Besides. his works were appreciated abroad, his had several succesful exhibitions on London, Paris, etc, and auction in New-York.

Visit Vereshchagin’s exhibition at the Tretyakov Gallery until the 15 of July.

Starting from August, 1 – flights on several international destinations are relaunched to and from Moscow. That is why we will be able to offer you private tours per request in September. Hope to see you soon!

Skype – Moscow and beyond